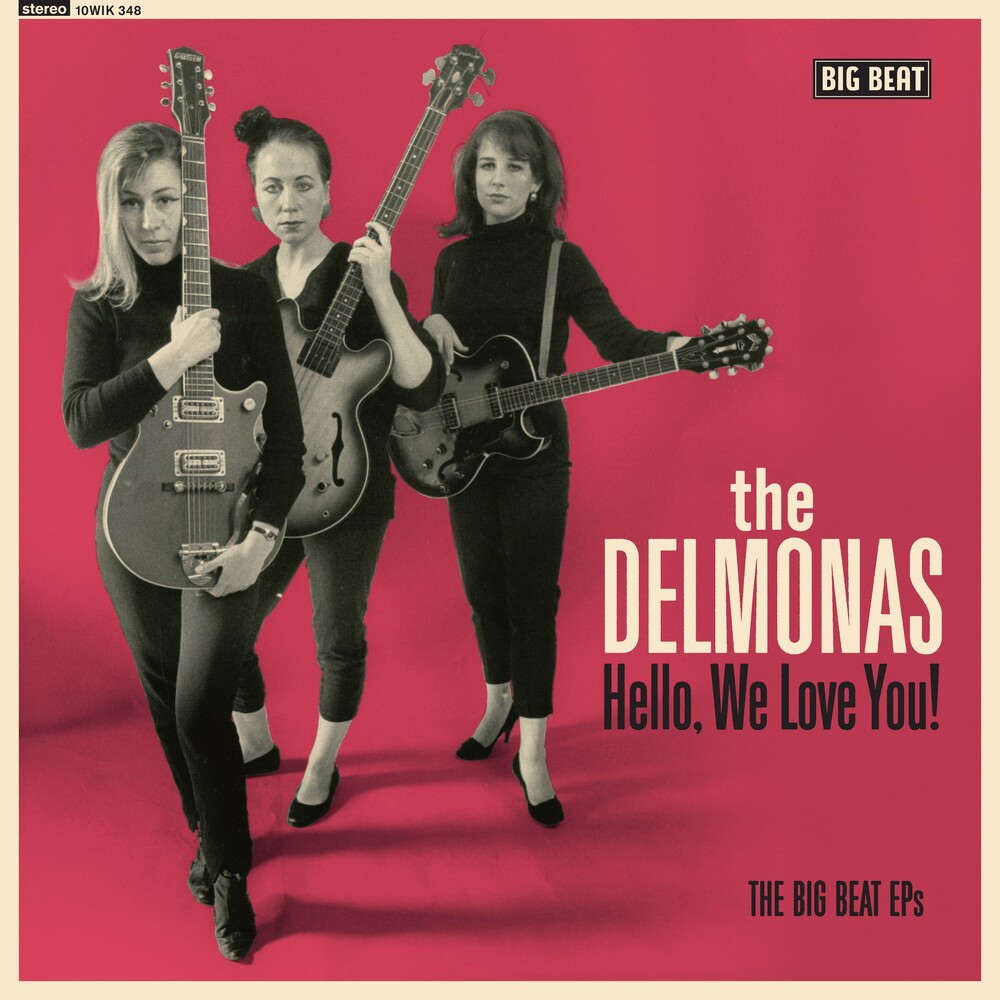 Hello We Love You: The Big Beat Eps (10in) (Uk)
Artist: Delmonas
Format: Vinyl
New: Not in stock
Wish

The tracks from the group's two 1984 EPs together on a swanky 10-inch vinyl LP. Inner bag features liner notes by Kris Needs incorporating new interviews with all three Delmonas and a series of great photos by Eugene Doyen. Sarah Crouch, Hilary Wilkins and Louise Baker started singing together as a unique spark of spontaneous magic inextricably linked to their boyfriends in the Milkshakes, then rocking a garage-punk antidote to shiny synth-pop and brash chart stars with a direct lifeline back to rock'n'roll's original simplicity and wildness. After Billy Childish and Bruce Brand formed the Pop Rivets in 1978, the guys hooked up with Micky Hampshire and Russell Wilkins to found the Milkshakes. Sarah shared a student house with boyfriend Micky plus Billy. After she and Hilary, then dating Russell, sang backing vocals on the Milkshakes' rollicking Beatles-translated take on the Shirelles' 'Boys', Louise's arrival turned them into a girl group pretty much by accident. "I loved the music the Milkshakes were playing," Louise recalls. "Loved the small, intimate venues and most of the bands that played with them, especially the Prisoners. I'd gone with the Milkshakes to Belgium and was somehow persuaded to get up on stage and sing something. Next thing I knew, there was some kind of plan to get the three of us in the studio. " At first the three girls were called the Milk-boilers, renaming themselves the Delmonas by the time Ace Records' Roger Armstrong and Ted Carroll suggested recording the EPs that furnish this collection. "I think we were asked to each think of three songs and turn up," says Louise. "I mostly listened to music from the 60s: lots of girl groups, Irma Thomas, Dusty Springfield, Bo Diddley, Velvet Underground, Kinks. Bruce had the best record collection; Mel Tormé was in there somewhere and one of my faves. Sarah came up with doing the Doors cover. " 'Comin' Home Baby' was written as an instrumental before Bob Dorough added lyrics and Mel Tormé recorded it in 1962. The Delmonas' finger-clicking, noir-dynamic version kicked off their first EP with authentic-sounding 60s production resonance, iced with mysterioso organ. The Cookies scored a hit with Goffin & King's 'Chains' in 1962, the Beatles' version providing the Hamburg Star-Club template for the Delmonas' energised rendition. The first EP, "The Delmonas Volume 1", rounded off with two songs from the Childish-Hampshire songwriting partnership: 'Woa' Now' and 'He Tells Me He Loves Me', the latter recalling the New York Dolls covering the Shangri-Las' 'Give Him A Great Big Kiss', mainly because it has similar chords.  "The Delmonas Volume 2" opened with Sarah's idea of covering the Doors' hit. "We thought, 'How would the Kinks have played it?'" she affirms. 'Hello, I Love You' had got the Doors into hot water with the Kinks' publishers for it's resemblance to 'All Day And All Of The Night'. The Delmonas home in and highlight that similarity, adding bonkers psychedelic drop and evocative new coda. Their surf-tinged version of the Milkshakes' 'I'm The One For You' is followed by the swampy screaming of 'Peter Gunn Locomotion', a cover of a 1963 single by Freddie Starr in his pre-stand-up comedian days as singer with the Midnighters. The set closed with the sultry organ-led vamp of the Milkshakes' 'I Want You', the nearest the Delmonas get to the slowies Sarah helpfully points out they referred to as "shag songs".
PRICES ON PIRANHARECORDS.NET DO NOT REFLECT THE PRICES IN OUR RETAIL STORE LOCATION. "IN STOCK" ON PIRANHARECORDS.NET DOES NOT REFLECT 'IN STOCK' AT OUR RETAIL LOCATION, HOWEVER IT MEANS WE HAVE QUICK ORDER FULFILLMENT (GENERALLY 2-3 BUSINESS DAYS).