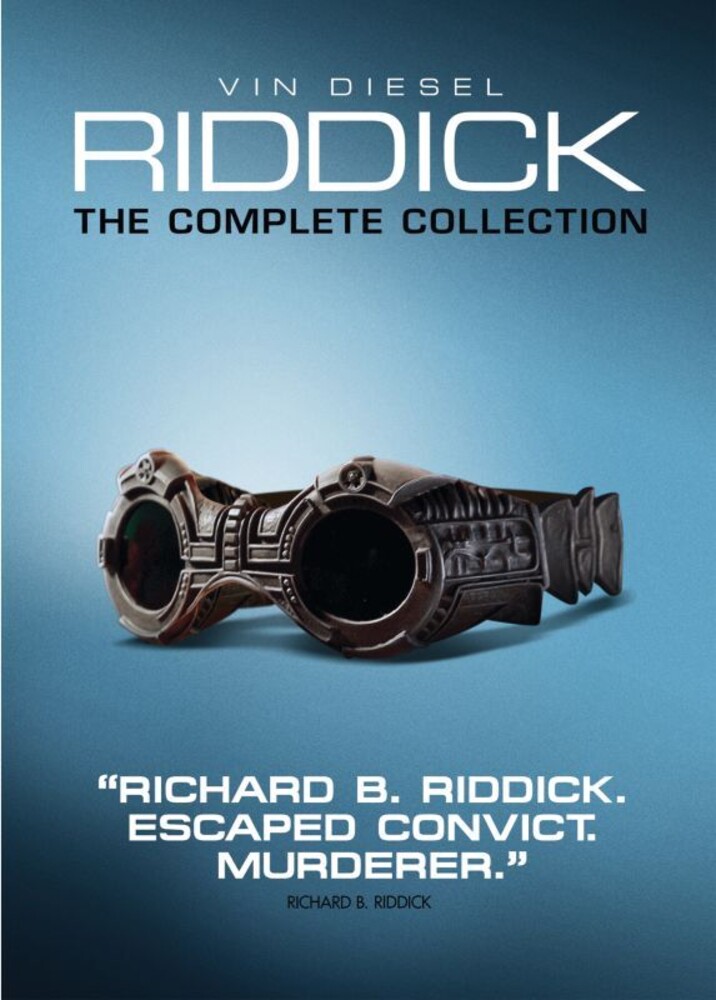 Three-disc set includes: Pitch Black (2000)After a spaceship crashes on a seemingly desolate desert world, the survivors discover it's home to deadly flying predators that thrive in darkness... and the planet's three suns are about to enter total eclipse. The group's only chance for staying alive rests with fugitive killer Riddick (Vin Diesel), but will he help them? Radha Mitchell, Cole Hauser, Keith David also star. Director's cut; 112 min. C/Rtg: R The Chronicles Of Riddick: Dark Fury (2004)Vin Diesel reprises his role as night-sighted interplanetary criminal Richard Riddick, lending his voice to this animated adventure. Serving as a bridge between "Pitch Black" and "The Chronicles of Riddick," the film finds Riddick, Jack and Imam being pursued by a bounty hunter. 35 min. C/Rtg: NR The Chronicles Of Riddick (2004)Action-packed follow-up to the sleeper sci-fi hit "Pitch Black" follows the continuing adventures of grizzled outlaw Richard Riddick (Vin Diesel). Reluctantly joining the struggle against a ruthless interstellar army that's wiping out everyone and everything in it's path, Riddick soon realizes that he may be the only one who can stop the destruction. Colm Feore, Thandie Newton, Karl Urban, Keith David, and Judi Dench co-star. Director's cut; 135 min. C/Rtg: NR Riddick (2013)Set five years after the events of "The Chronicles of Riddick," this exciting sci-fi follow-up finds Richard Riddick (Vin Diesel) double-crossed and left for dead on a remote planet while searching for his homeworld. A distress beacon brings a team of bounty hunters and a band of mercenaries to his location, forcing Riddick to fight for his life against both groups as well as deadly scorpion-like monsters. Jordi MollĂ , Dave Bautista, Matt Nable, Katee Sackhoff, Karl Urban co-star. 119 min. C/Rtg: R
PRICES ON PIRANHARECORDS.NET DO NOT REFLECT THE PRICES IN OUR RETAIL STORE LOCATION. "IN STOCK" ON PIRANHARECORDS.NET DOES NOT REFLECT 'IN STOCK' AT OUR RETAIL LOCATION, HOWEVER IT MEANS WE HAVE QUICK ORDER FULFILLMENT (GENERALLY 2-3 BUSINESS DAYS).
back to top