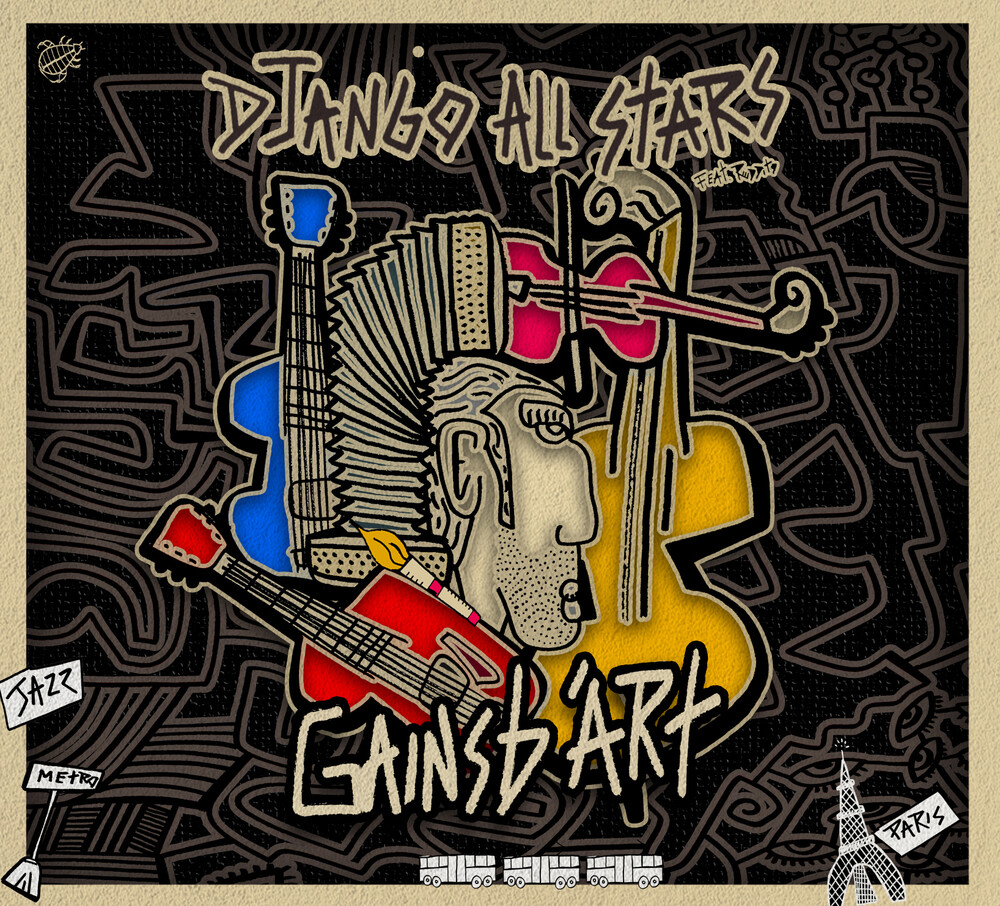 Familiar with the biggest stages in the United States (Carnegie Hall, Birdland, Newport Jazz Festival, Hollywood Bowl...), the Django Allstars pays homage to the most "Anglo-Saxon" of French singers, the 30th anniversary of his death. From Javanese to Punching des Lilas (Le PoinĂ§onneur des Lilas), passing by Jane B. and Ă‰lisa, eleven essential hits by Serge Gainsbourg revisited in the shimmering colors of gypsy jazz (guitar, violin and accordion), by five of the best specialists in the genre, with the help of the painter Red Dito. Serge Gainsbourg, they say, took guitar lessons with Matelot FerrĂ©, an essential reference in gypsy jazz. It is therefore in all sympathy that the strings of the guitar of Samson Schmitt, gypsy virtuoso of Django Allstars, joined to those of the violin of Pierre Blanchard and the blades of the accordion of Ludovic Beier, vibrate in unison, at the same time. Occasion of this tribute to the brilliant troublemaker of French song, the year of the thirtieth anniversary of his disappearance. Fully motivated, this gypsy touch - of which Ă‰lisa's rereading undoubtedly represents the archetype - is declined here in a willingly classy subtlety, which would undoubtedly have thrilled it's illustrious inspirer. She also enlisted the help of the brush and palette of Red Dito, whose canvases form a happy counterpoint to the music - a conjunction that could not be more relevant when we know what place painting occupied in the itinerary of the great Serge. Let us add that this album was composed and recorded by our friends from Django Allstars in full confinement. A little "tour de force" when we measure the extent to which the isolation of each individual manages to be absorbed into the miraculous cohesion of the whole.
PRICES ON PIRANHARECORDS.NET DO NOT REFLECT THE PRICES IN OUR RETAIL STORE LOCATION. "IN STOCK" ON PIRANHARECORDS.NET DOES NOT REFLECT 'IN STOCK' AT OUR RETAIL LOCATION, HOWEVER IT MEANS WE HAVE QUICK ORDER FULFILLMENT (GENERALLY 2-3 BUSINESS DAYS).
back to top