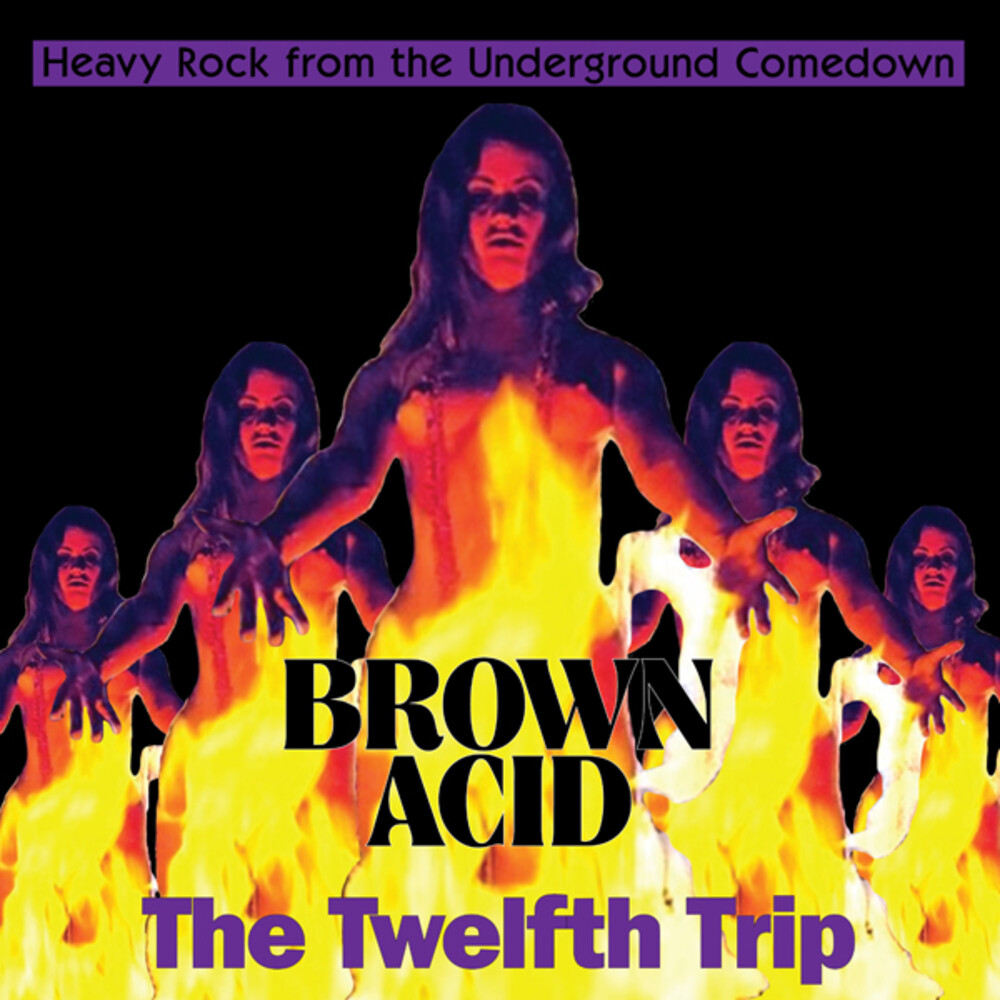 That's right, Riding Easy has reached a toker's dozen editions of brilliant long-lost, rare, and unreleased hard rock, heavy psych, and proto-metal tracks from the '60s - '70s. Clearly this has become a bonafide archaeological movement as each new installment leads the listener to more exciting new discoveries. Like the label has done throughout this series, all of these tracks were painstakingly licensed legitimately and the artists were paid. Make oneself comfortable and prepare for yet another deep, deep dive into the treasure trove of dank, subterranean, wild-eyed and hairy rock 'n' roll with Brown Acid - The Twelfth Trip.Here are some examples of the treasures that lie herein: The Waters start this Trip off right with swampy fuzz- and phaser-soaked dueling guitars oozing from the grooves of their 1969 single "Mother Samwell." The Louisville, KY trio somehow failed to make much of a splash however, only issuing two 45s, one in '68 and this rocker the following year, before eventually evaporating in '72. The bassist went on to play in Hank Williams Jr.'s band for a couple of decades, so the band's fortunes weren't entirely sunken.Side two opens with Ace Song Service, who probably thought they were pretty clever with their risquĂ© acronym name, but it's their b-side "Persuasion" that really kicks A.S.S. Rollicking, relentless drums, walking bass, staggering guitars and shimmering Hammond organ shake the foundations while crooning blue-eyed soul vocals remind the listener that this is still the late-60s. The Trip concludes with Dickens, whose "Sho' Need Love" / "Don't Talk About My Music" 45 is one of those record collector's Holy Grail type of releases. The 1971 single only exists as a demo, printed as a white label promo pressing for Scepter Records. Comprised of NRBQ's road crew and some band members, all playing instruments they didn't know how to play, the recording happened essentially by accident when studio time became available after Gomer Pyle actor and balladeer Jim Nabors cancelled a session. The group quickly cut a few songs, which an enthusiastic A&R man had pressed up, before the label president nixed it and fired the VP for allowing such nonsense. It's believed that only about 50 copies survived!
PRICES ON PIRANHARECORDS.NET DO NOT REFLECT THE PRICES IN OUR RETAIL STORE LOCATION. "IN STOCK" ON PIRANHARECORDS.NET DOES NOT REFLECT 'IN STOCK' AT OUR RETAIL LOCATION, HOWEVER IT MEANS WE HAVE QUICK ORDER FULFILLMENT (GENERALLY 2-3 BUSINESS DAYS).