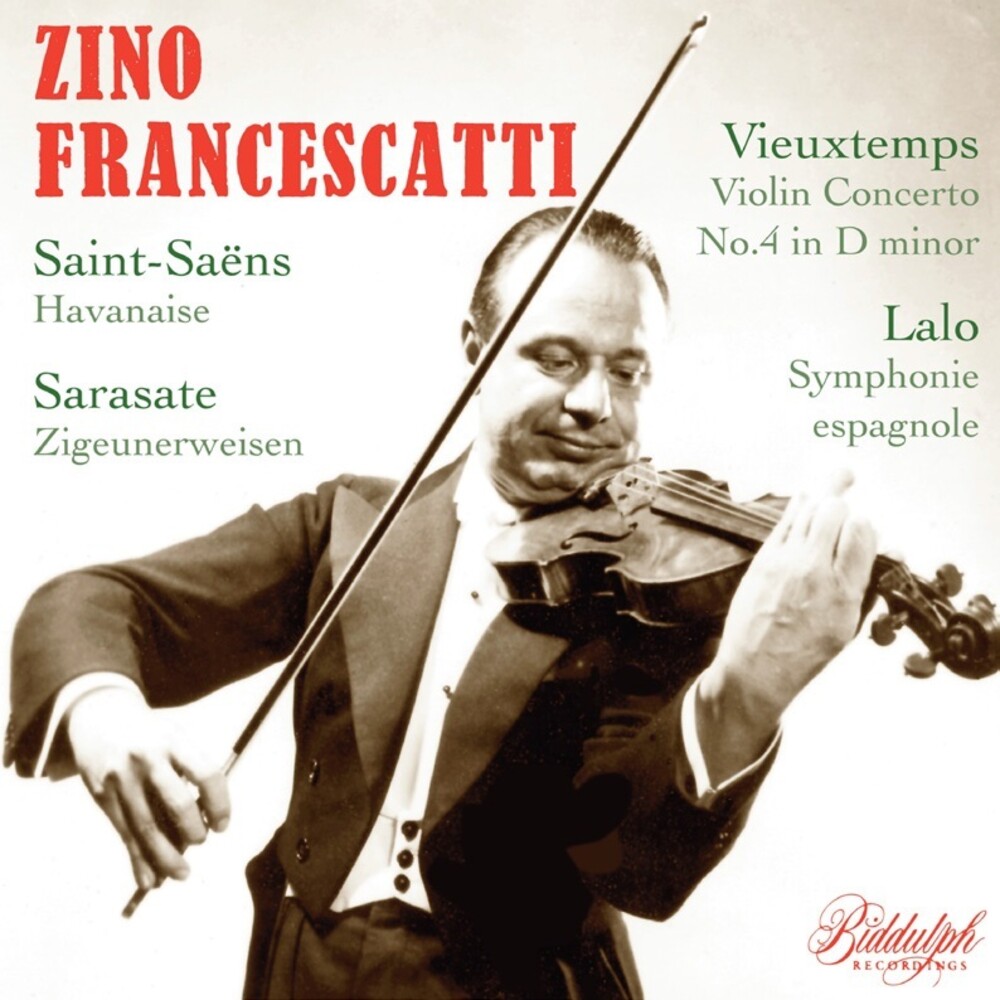 This CD features four recordings by the great French violinist Zino Francescatti. Especially noted for his immaculate technique and brilliant tone, Zino Francescatti was regarded as one of the premier violinists of the 20th century. Furthermore, he was direct descendent of NiccolĂ˛ Paganini through his father who studied with the Genoese legend. Francescatti emigrated to the U.S. during WWII, and recorded for the American Columbia label until his retirement in 1975. This CD features four recordings that Francescatti made with orchestra in 1957, including Lalo Symphonie espagnole. Lalo's colorful showpiece was one of the most popular works for violin and orchestra in the 1950s. Yet even among recordings by such giants as Heifetz, Milstein, Menuhin, Szeryng, Grumiaux, Kogan, Oistrakh, and Stern, Francescatti's spectacular performance stands out. As 1957 was the year in which stereo records were created and sold to the general public, Francescatti's recorded performance was the first stereo LP of the Lalo Symphonie espagnole ever to be made. Also on this CD is Vieuxtemps Violin Concerto No.4 in D minor. This four-movement is scored for full orchestra, including four horns, three trombones, and harp. The expansive orchestral passages prompted Hector Berlioz to describe Vieuxtemps's Concerto as 'a symphony with solo violin'. The two other works on this CD, Saint-SaĂ«ns's Havanaise and Sarasate's Zigeunerweisen, are perennial favorites well suited to the sunny exuberance of Francescatti's playing.
PRICES ON PIRANHARECORDS.NET DO NOT REFLECT THE PRICES IN OUR RETAIL STORE LOCATION. "IN STOCK" ON PIRANHARECORDS.NET DOES NOT REFLECT 'IN STOCK' AT OUR RETAIL LOCATION, HOWEVER IT MEANS WE HAVE QUICK ORDER FULFILLMENT (GENERALLY 2-3 BUSINESS DAYS).
This website uses cookies to personalize content and analyse traffic in order to offer you a better experience.
I accept Learn More
back to top