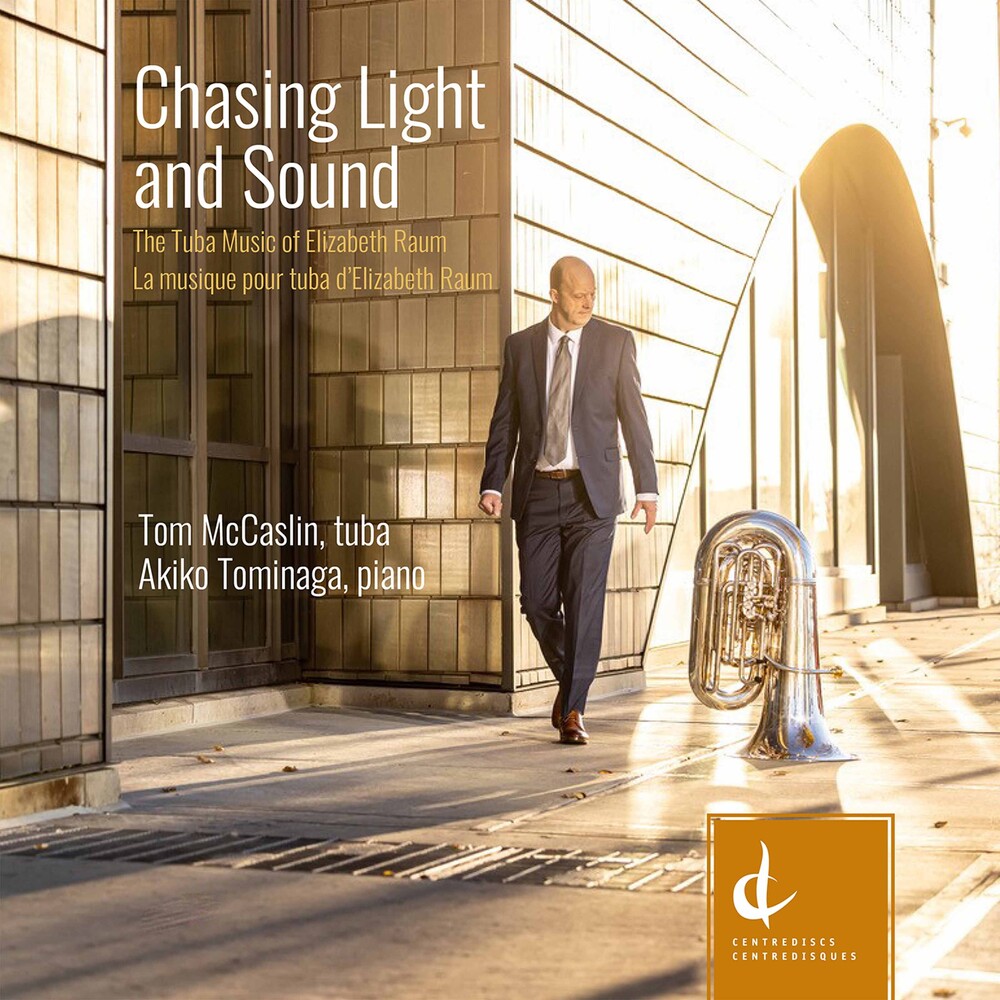 Chasing Light and Sound: The Tuba Music of Elizabeth Raum presents the works written for the tuba in a solo role between 1991 and 2002 by Canadian composer Elizabeth Raum. The works on this recording were all written for and commissioned by the late Canadian tuba virtuoso John Griffiths. These works include pieces originally written solo for tuba and large ensemble: Legend of Heimdall, T for Tuba, Pershing's Concerto, and Concerto Del Garda, as well as one work for unaccompanied tuba, Sweet Dances. These works are all presented here with the accompaniment as piano reductions. These pieces have become standards in the solo tuba repertoire, are frequently required as solo competition pieces world-wide, and are included in the standard recital repertoire. Elizabeth Raum is arguably the most prolific composer for the tuba in a solo role. Tubist Tom McCaslin is currently the Principal Tuba in the Calgary Philharmonic Orchestra and is the instructor of tuba and euphonium at the University of Calgary. Described by Fanfare Magazine as "one of the contemporary tuba virtuosos", he has performed as a soloist in Canada, the United States, Switzerland, Portugal, Finland, New Zealand and Australia. He has released solo recordings on Crystal Records: "Inside Out" (2009) and on Potenza Records "One More Dance" (2011). He was a student of the famed Canadian tubist John Griffiths during the period that all the pieces presented here were composed. He is joined on this recording by pianist Akiko Tominaga
PRICES ON PIRANHARECORDS.NET DO NOT REFLECT THE PRICES IN OUR RETAIL STORE LOCATION. "IN STOCK" ON PIRANHARECORDS.NET DOES NOT REFLECT 'IN STOCK' AT OUR RETAIL LOCATION, HOWEVER IT MEANS WE HAVE QUICK ORDER FULFILLMENT (GENERALLY 2-3 BUSINESS DAYS).
This website uses cookies to personalize content and analyse traffic in order to offer you a better experience.
I accept Learn More
back to top