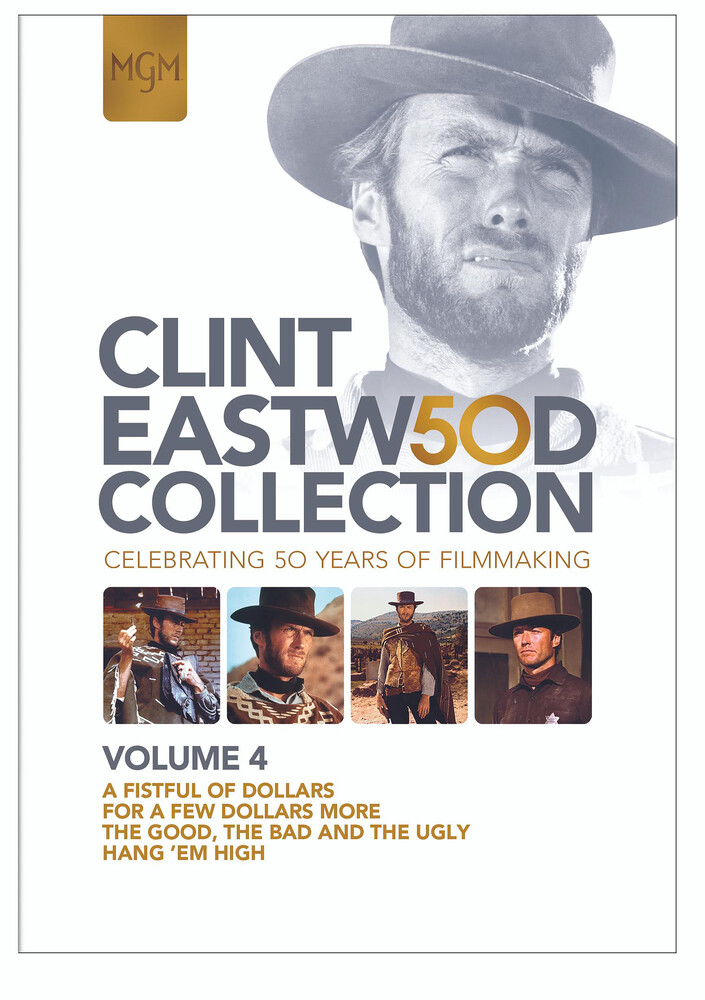 Four-disc set includes: A Fistful Of Dollars (1964) Director Sergio Leone's landmark "spaghetti western" features Clint Eastwood in his breakthrough role as "the Man with No Name," pitting members of two opposing families in control of a frontier town against each other for his own brand of justice. Based on Kurosawa's "Yojimbo," the brutal drama features an Ennio Morricone score. With Marianne Koch, Johnny Wels. 100 min. C/Rtg: R For A Few Dollars More (1965) Clint Eastwood squints his way to the top in Sergio Leone's slam-bang sequel to "A Fistful of Dollars." This time around, the Man with No Name is on the hunt for a ruthless bandit (Gian Maria Volonté), as is his rival, the brutal wanderer Colonel Mortimer (Lee Van Cleef). Unable to capture their shared foe alone, both men agree to an uneasy partnership in order to get their prey before he gets them. With Klaus Kinski, Mara Krupp. 132 min. C/Rtg: R The Good, The Bad And The Ugly (1966) Highlighted by Ennio Morricone's haunting score, the final chapter in Sergio Leone's groundbreaking "Man with No Name" trilogy follows Clint Eastwood, Lee Van Cleef, and Eli Wallach as they embark on a quest to find a stash of hidden gold. After forming an uneasy alliance, the trio find themselves facing greed, treachery and murder as they search for the loot. With John Bartha, Luigi Pistilli. Extended version; 179 min. C/Rtg: R Hang 'Em High (1968) After his "Dollars" trilogy made him an international star, Clint Eastwood returned to America to portray a cattleman who is falsely accused of murdering a local rancher and sets out to exact vengeance on the members of a lynch mob who tried to string him up. Americanized "spaghetti" western co-stars Inger Stevens, Ed Begley, Pat Hingle and Bruce Dern. 115 min. C/Rtg: PG-13 Widescreen; Soundtrack: English.
PRICES ON PIRANHARECORDS.NET DO NOT REFLECT THE PRICES IN OUR RETAIL STORE LOCATION. "IN STOCK" ON PIRANHARECORDS.NET DOES NOT REFLECT 'IN STOCK' AT OUR RETAIL LOCATION, HOWEVER IT MEANS WE HAVE QUICK ORDER FULFILLMENT (GENERALLY 2-3 BUSINESS DAYS).
This website uses cookies to personalize content and analyse traffic in order to offer you a better experience.
I accept Learn More
back to top